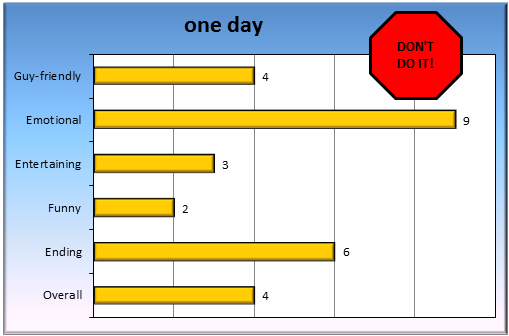 A man and woman spend a night together after college graduation then remain friends to various degrees over the course of several years. The movie explores their relationship in many multiple forms and throughout various stages of their lives. Throughout the years, they contact each other in one way or another on the same day each year. They each face success and defeat; sometimes together, at other times apart.

Anne Hathaway and Jim Sturgess star in this film. The story is pretty clever, and somewhat interesting. The primary source of the drama within the storyline is Sturgess’s character. His poor decisions and chaotic lifestyle are a bold contrast to the loyalty and patience demonstrated by Hathaway’s character. He makes things more complicated than they need to be, and just can’t seem to ever decide what he really wants in life… while She remains his ever faithful admirer and confidant. This movie is definitely directed toward an empathetic female audience. Emotionally charged; it’s the type of movie that would be fine without anybody dying… but you just know that somebody has to.

Your woman will really love it, but you probably won’t… I have to say Don’t Do It.